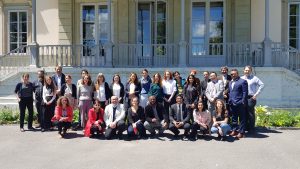 by Luke Moffett, Cheryl Lawther, Sunneva Gilmore and Ebba Lekvall. This blog is based on workshops held in Geneva Academy, IOM and Palais Wilson (OHCHR).

Reparations have recently been the hot topic from its invocation at the US Congress, the Khashoggi killing to WWII claims by Poland and Greece against Germany. Reparations have a particular legal meaning that intends to acknowledge wrongdoing and remedy as far as possible victims’ harm. Private law notions of restitution heavily imbue the concept. Indeed, the seminal case of Chorzów Factory by the Permanent Court of Justice laid the foundations for reparation in international law which ‘must, as far, as possible, wipe out all the consequences of the illegal act and re-establish the situation which would, in all probability, have existed if that act had not been committed.’

In the past three decades we have seen an increase in reparation programmes from the German Compensation Scheme for Forced Labour, the UN Claims Commission, domestic reparation programmes such as Peru to jurisprudential strides of the Inter-American Court of Human Rights and the initial steps by the International Criminal Court. 2020 itself will mark fifteen years since the UN adoption of the Basic Principles for the Right to Remedy and Reparations for Gross Violations of Human Rights and Serious Breaches of International Humanitarian Law that sets the broad international standards for victims and states.

Despite these developments most victims of such violations do not receive reparations. While states are increasingly being brought before international and regional bodies to fulfil their duties and satisfy victims’ rights, they have often struggled or been reluctant to implement their international obligations. Moreover, these are not simply private, individual claims. Rather, reparations are often required to respond to multiple forms of violations and significant numbers of victims. Indeed, $29 billion has been marked for over 8.8 million victims through the Unit for Comprehensive Reparation and Care of Victims in Colombia. Global trends of violence, while overall decreasing, face a progressively decentralising and weakening state control, globalisation of responsible actors, and transnational victimisation, which traditional principles and international law struggle to grasp. While international law is primarily aimed at states, non-state actors, including, NSAGs, donors and civil society, as outlined here, play an increasingly important and central role that needs to be better understood and engaged with.

Since October 2017 we have been conducting research and fieldwork in a range of post-conflict transitional societies, which have or are currently grappling with the legal, political and social challenges associated with making reparations after protracted periods of conflict and mass victimisation. Those countries include Colombia, Guatemala, Nepal, Northern Ireland, Peru, South Sudan and Uganda. In early June 2019 we held a series of workshops in Geneva in coordination with the International Organisation for Migration, the Office of the High Commissioner for Human Rights and the Geneva Academy. The objective of these workshops was to contribute to creation of two international facing handbooks we will publish in 2020 – one on reparations and non-state armed groups and another on the role of donors and civil society in implementing reparations. As such, this blog outlines some preliminary findings and suggestions of how to close the gap between international legal obligations and victim experience on the ground in what to expect of domestic reparation programmes. We outline three key actors that can improve the delivery and experience of reparations: non-state armed groups; civil society; and donors.

While at first glance it may seem counterintuitive to suggest that non-state armed groups can make reparations, we come at this argument from three directions. First, we have a firm practical commitment to seeing ex-combatants as a potential resource in peace-making work, rather than simply as a security challenge to be managed. Second, while the UN Basic Principles on the Right to Remedy and Reparations are mainly aimed at states, there is increased recognition that some non-state armed groups can be bound by certain human rights obligations alongside their existing commitments under international humanitarian law for non-international armed conflicts. Third is our first hand experience of engaging with non-state armed groups who are actively making reparations, through for example, involvement in reparation schemes, the issuing of apologies and statements of acknowledgement, truth telling and in the recovery of the remains of those disappeared during periods of conflict.

Non-state armed groups can provide reparations to three key constituencies: the civilian population; their own members; and other armed organisations. While space permits an exhaustive examination of the relationship between armed groups, these potential recipients, and reparations, our fieldwork has demonstrated three common themes which may facilitate the involvement of non-state armed groups in the delivery and reception of reparations.  Each of course requires political and moral will and legal imagination.

First, it is essential to understand the ideology and politics of the armed group and their self-imagination. This understanding can provide a political and moral framework against which non-state armed groups can engage in making reparations that both brings their own constituency with them and should help to ensure that the reparations offered are feasible, realisable, and sincere. The ‘embarrassment’ on the part of the IRA at its role in disappearances and the wider republican movement’s objective of demonstrating commitment to political means has, for example, been influential in the IRA’s involvement in the search of the remains of the disappeared during the Northern Ireland conflict. If a group has its own code of conduct, those rules may also provide a template against which reparations can be made.

Second, non-state armed groups can be encouraged to think of reparations as form of responsibility whereby ownership of past actions is taken, harm is acknowledged, and a commitment to non-repetition is made. Such ‘good faith’ efforts may aid reintegration and rehumanisation of members of the non-state armed groups. Third is the need for ‘messy bargaining’. Bringing non-state armed groups into reparations schemes requires a pragmatic assessment regarding which groups can be engaged with, and a non-prescriptive and context specific approach, such as the Special Jurisdiction for Peace (JEP) in Colombia.  Equally, engagement by a non-state armed group with a victimised community will be essential prior to making reparations. In the case of making ‘legitimate apologies’, it may for example be necessary to consider how, when, and by whom an apology should be delivered – which can only be done in consultation with those to whom the apology is directed.

Civil society has an instrumental role in facilitating reparations, which includes, but are not limited to: documentation, accompaniment, service provision, and monitoring, which may be from the initial stage of legal or policy making through to implementation. To demonstrate, Colombia’s Bill of Assistance to Victims of Sexual Assault of Armed Conflict (Law 1719/2014) contained a clause that would make the previous mandatory Ministry of Health’s Protocol of Medical Assistance to Victims of Sexual Violence optional. This would have permitted healthcare professionals to choose whether or not to offer victims comprehensive medical treatment or provide information to them about their health rights, limiting its scope and enabling discriminatory practice at a time when the protocol was being applied with some difficulty. In response five human rights and women’s rights organisations appealed to the Constitutional Court, which reinstated the protocol to mandatory. Accordingly, civil society can help prevent oversights in legislation that would prejudice victim eligibility to reparations.

In terms of donors, cost, legal connotations and political priorities are often barriers to engaging on reparations. Thus they are frequently instrumental in supporting civil society organisations’ responses to some of the most debilitating consequences of conflict, often in a timelier manner that reduces long-term health impacts and alleviates burdens of reparation programmes that come later. For instance, the ACQUIRE project, funded by USAID, brought together experts from 12 African countries in 2005 to share learning experiences, identify challenges, and devise country-specific strategies on combating traumatic gynaecological fistula from conflict-related sexual violence. An example where fistula management materialised with donor support is the collaboration between Mercy Ships International and Fistula Care. As in many donor-funded programmes, this initiative relies on an inter-agency approach that partners with community-based organisations to identify potential fistulae cases that would benefit from surgery, and to train surgeons.

Donors can have an important role in supporting reparations. Their support does not necessarily need to translate to direct funding of reparation programmes, but can also include interim assistance, support for civil society to enable victims to participate, and capacity building. The latter occurred in the Sierra Leone Reparations Programme (SLRP), which received technical assistance and administrative oversight from the International Organisation for Migration (IOM). As such, there are clear synergies between the contribution of civil society and donors, which can fill some of the gaps that states struggling to recover from conflict may not be able to address by themselves.

Reparations cannot completely remedy all the harm or consequence caused by gross violations. However, such measures play an important part in signalling the return to common values and to the rule of law. Despite the increasing attention to reparations by different non-state actors, they can pursue their own subjective and diverging agendas that can conflict. Given the constructive ambiguity of the UN Basic Principles on Reparations, which for measures such as rehabilitation only includes one line, it can create a fuzzy boundary between reparations and assistance/development. In the face of an unwilling or unable state, civil society and donors may step in to fill the gap, but does that make the recovery of the disappeared such as by the ICRC, FAFG and CAFCA in Guatemala or health services to victims of sexual violence, reparations when it is not coming from a responsible actor?

The difficulty of such efforts is that such non-state organisations lack the ability to provide complete national programmes, long-term support or are dependent on funding priorities. The widening discourse of reparations to respond to all violations, is problematic as it is increasingly being used to ‘brand’ assistance and development as have a ‘reparative effect’ in that they meet some of victims’ needs, but risks diluting victims’ rights and states’ obligations. At the heart of these issues is the place and practicality of international legal obligations on reparations in the face of gross violations of human rights and serious breaches of international humanitarian law.

Accordingly we need to rethink the scope and implementation of legal obligations for reparations for such violations. While international law and the growing jurisprudence can put some pressure on states to implement broader reparations programmes, we found that it practice this often failed to translate to political will to ensure victims receive some form of remedy beyond individual cases or prioritised groups. In addition, states repeatedly neglect structural violence that continues to put many victims at risk to further violations, despite peace agreements and political transitions. This is not to say that international law on reparations has no place, but that greater attention and effort has to be placed on states and other actors to effective implement reparations for victims. International and domestic law on reparations has at its heart is a moral and political commitment to remedy the consequences of such violations. A better way to reconnect with such shared values and a range of actors to more effectively implement reparations, by developing more clarity and monitoring of implementation of secondary obligations to make reparations for such gross violations.

This blog originally appeared on EJILtalk.

The Limits of the Law: Putting Reparations into Practice